Anne-Sophie Lunding-Sørensen (b. 1969) has an MA in film and media studies and worked in communication and management before making her début in 2010 with the novel LIGHT TRAVELLERS. In 2014, her second novel, FALL, was published. She has also written the trilogy HAPPY ENDING (2016), HAPPY FAMILY (2018) and HAPPY HOUR (2019) about the extremely overweight anti-heroine Elvira Gregersen, which is now turned into a TV series.

THE SANATORIUM
Two women in love, an epidemic of suicides in a mental hospital, a basement full of evil. One summer day in 1929, psychiatrist Hannah Neumann from Vienna arrives at Lakewood Sanatorium for Nervous Disorders in Southern Jutland. A suicide epidemic has been ravaging the younger female patients for a while and Hannah is supposed to try and put a stop to it. Hannah has been working with Freud in Vienna, and, like him, she practises modern psychoanalysis, which is based on conversations with the mentally ill. This method does not go down too well with the other psychiatrists in the sanatorium. At Lakewood, Hannah has to work with a young, ambitious nurse called Dagmar who is quick to learn, and the long intense working days soon lead to the two women entering into a secret love affair. In the third level of care is the large, mute patient known as The Horse. She hears voices and has visions about the evil that thrives at Lakewood. Hannah and Dagmar concentrate on preventing more suicides. Some psychological detective work gets underway, but despite their great efforts, it isn’t long before another young woman walks into the lake and drowns herself in the light of the full moon. THE SANATORIUM is a sharp tale about how power influences people and how the perception of mental illness is indeed subject to the eye observing the patient. And, it is about forbidden love.

The author can be reached at anne-sophie@mail.dk 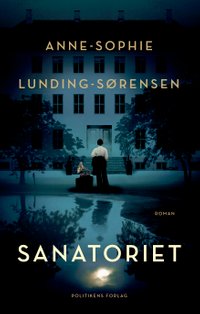